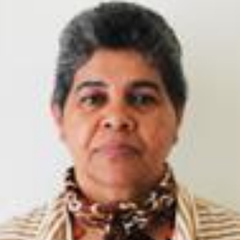 She has published articles in specialized magazines and newspapers, both in Cape Verde and Portugal, and has several speeches published in books following presentations made at several conferences. She is the co-author, with Ana Cristina Lopes Semedo, of the “Exporters Guide to the European Union Market” (Guia do Exportador para o Mercado da União Europeia), edited in March 2001, at Praia, by the Capeverdean investment promotion agency. She is also the co-author, with Luís Alves and Pedro Barros, of the “Baseline Studies: Socio-Economic Indicators and Environmental Situation” (Estudos de Base: Indicadores Sócio-Económicos e Situação do Ambiente) which, together with the National Report – Synthesis (Relatório Nacional – Síntese) prepared by Cláudio Furtado, compose the “Human Development Report – Cape Verde 1998 – UNDP” (Relatório do Desenvolvimento Humano – Cabo Verde – 1998 – PNUD), for the United Nations Development Program (UNDP).

She was the Coordinator in Cape Verde of the National Implementation Unit of the Enhanced Integrated Framework / World Trade Organization, and had been studying the development of trade, investment, private sector, and value chains, when, following a public biding launched at all CPLP member States, she was appointed as CPLP Director-General. She moved then to Lisbon, where the CPLP headquarters are located, and took office as CPLP first female Director-General on February 3rd 2014.

The study aims to making a brief assessment of the status of Museology as practiced in the archipelago of Cape Verde, of the capeverdean laws related to culture and museums policy, as well as the relevant part of the environmental and land-use policies. Sharing Hugues de Varine-Bohan perspective on the Museum as a local development institution, the study also aims to assess the feasibility of the capeverdean museum to become part of the local governance institutions, which respect the population, as the heritage source and its heir. Finally, it proposes what could be the major lines for a national policy for museums, in the framework of Sociomuseology, to promote the structuring of a national network of museums able to deserve their communities, empowering them to face the development challenges.