Written by joanarsenio on 14 November, 2018. Posted in Non-PhD Integrated Researchers 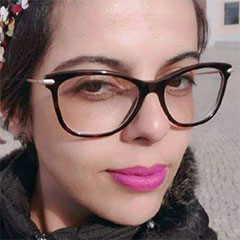 Moana Campos Soto is a PhD student and Master in Museology from the Universidade Lusófona de Humanidades e Tecnologias (2010), specializing in Education and Museums at Universidad Europea Miguel de Cervantes (2016) and graduated in Pedagogy from the Pontifical Catholic University of Rio de Janeiro ( 2006). Museologist and Researcher of the Institutional Memory Division of UFRJ, part of the System of Libraries and Information – SiBI (2017). Member and collaborator of MINOM-ICOM International. Coordinator of the EducaMuseu project. Member of the working group for the implementation of the Integrated System of Museums, Archives and Cultural Heritage of UFRJ – SIMAP (2017). Museologist at the National Museum / UFRJ (2012-2015). Collaborator of the Brazilian Association of Museology (2010-2011). Researcher at the Brazilian Institute of Museums (2009-2010). Researcher of MINOM-ICOM (2007-2008). Educator of the Museum of the Republic / RJ (2004-2006).

“And the word became flesh”: The influence of Paulo Freire in the New Museology.
Title
Prof. Dra. Judite Primo
Advisor

This project intends to address a theme that, despite being pointed out as central by the main actors in the field of Sociomuseology, has not yet received an in-depth study: the influence of Paulo Freire’s thinking on the emergence of the International Movement for a New Museology (MINOM). This influence is evidenced by the invitation to Paulo Freire – not materialized due to the action of the Brazilian military-business dictatorship – to chair the Round Table of Santiago de Chile (1972), the movement’s central landmark. If the International Council of Museums recognizes education as the main function of museums, an analogy can clearly be drawn between the rupture of traditional museology and the new museology, with the breakdown of a banking education and liberating education, expressed in the statement of this by Hugues de Varine-Bohan, when he directed ICOM (1979) and spoke of the transformation of “object man into subject man.” To this end, it will be sought to establish direct theoretical influences, such as socio-educational guidelines for the construction of a museological theory and practice committed to the community and focused on the conscious exercise of citizenship. But it will also present the world scenario that made possible the approximation of museology to Freirian thought, particularly the third (1944/1964) and fourth (1968-1980) revolutionary vague, which in the first generated on the periphery of the world new conceptions – marked by the Afro-Asian decolonization, the Cuban Revolution and the Chinese Cultural Revolution – that influenced the following, the most internationalized, and that reached the center of the system, having as great moments May 1968 and the Carnation Revolution. It is because of these that the great European actors of the New Museology are approached with the Freirean theory of the periphery.