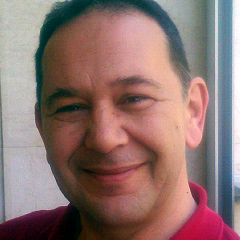 He is an assistant professor at the Faculty of Engineering of ULHT, an institution in which he has taught, since 1997, subjects in the areas of Physics, Mathematics and Programming. He was, for three years, Professor of Physics (Trainee Assistant) at the University of Beira Interior, also having a two-year experience in Basic and Secondary Education, in which he taught Physics, Chemistry and Mathematics. Since 2010, he has been coordinator of the scientific area of Physics at the Faculty of Engineering at ULHT. Between 2003 and 2013, he was an assistant researcher in the MARETEC group of the Environment and Energy section of the Mechanical Engineering Department of Instituto Superior Técnico. During this period, I work in the area of oceanographic modeling, as well as in biological modeling. Also in this group, he participated in several international projects, having written book chapters, as well as publications and oral publications in international and national criteria.

Currently, he works in the field of science teaching, focusing on the use of programming and computational environments in the teaching / learning processes of Physics, Chemistry and Mathematics. With these methodologies, it seeks to enhance the appropriate learning of Sciences, based on interdisciplinarity and integration of concepts.