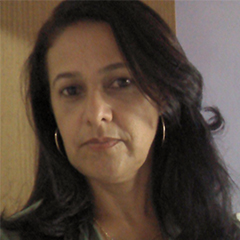 Luzinete da Silva Figueirêdo, teacher of the Municipal, state and private schools, professor of post-graduation of the group of emphasis on studies and research. Teacher acting during the last 35 years in different realities and modalities of teaching, continuous learner on the reality of the students, licensed in History (UNEB – University of the State of Bahia – Campus II-Alagoinhas), licensed in Pedagogy (Faculty D. Pedro II – Salvador – Bahia), Bachelor of Theology (University center Leonardo da Vinci-Alagoinhas – BA), student of Sociology (University Center Leonardo da Vinci-Alagoinhas – BA), post-graduated in Superior Teaching, specialist in Afro-Brazilian history, post-graduated in the teaching of geography, post-graduated in public policies in education. By working with students of the most different realities, being active in municipalities of the interior of the Brazilian northeast whose reality is characterized by low income, students who survive with the Bolsa Família, which represents a context of difficulties, in which the learning is seen by many as a way to improve life, for others as a step to be fulfilled, but that in general do not believe in its effectiveness. I live with the different perspectives of life of those who are involved with the public school as much as with private school, I know the ways in which each one plays its role in front of society and I perceive the differences as each of these acts.

I was born in the city of Inhambupe, in a country considered third world, I was educated in municipal and state public school whose ideology was established by the military regime. Daughter of semi-literate parents (they studied the initial series of primary education), mother was a housewife and father was a wall painter, but who prioritized the study of their nine children. A hard childhood, but I sought in books and studies a way to build a different life from the difficult reality of my parents.

I became a teacher at the age of 17 (technical course of magisterium, today extinct), I entered the college of History, at 28 years, married and mother of two daughters, (currently a lawyer and other engineer and also a doctor). To study over time is to seek to understand the realities that guide the movements of societies, of the different ways that life happens for each one.

Currently, I seek to return to the research, writing of articles and aim to achieve the writing of the book about the “Education I Lived”, the daughters are created, I will retire from schools and dedicate my time to articles, seminars, records of everything I learned over the years of the classroom.

The school, the education and the students form the whole of my living, my reality, I seek to stimulate new forms of life to those who often no longer find prospects that make them move forward. Thus, it is my way of stimulating students to find new paths through the learning that the school offers.